Welcome to our virtual tour.

We’ve gathered below some of the best images, 360° views, and descriptions we could to give you an immersive digital experience of the shrine. If you prefer a paper version, we have pamphlets available in three languages.

The first grotto started by Fr. Dobberstein in 1912 took five years to build. It is built in three half circles in honor of the Three Divine Persons, the Father, The Son, and the Holy Spirit. Most of the rocks in this grotto are calcite, which came from a cave in South Dakota, near the Black Hills. This grotto was built to fulfill the promise Fr. Dobberstein made to the Blessed Mary for curing him when he was stricken with pneumonia.

“Now the salvation and the power and the kingdom of our God and the authority of his Christ have come, for the accuser of our brethren has been thrown down, who accuses them day and night before God. And they have conquered him by the blood of the Lamb and by the word of their testimony, for they loved not their lives even unto death. Rejoice then, O heaven and you that dwell therein!” Revelation 12:7-12 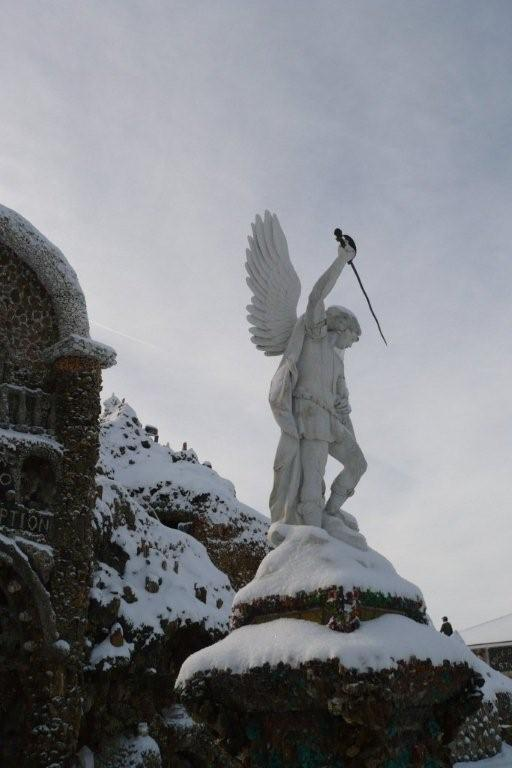 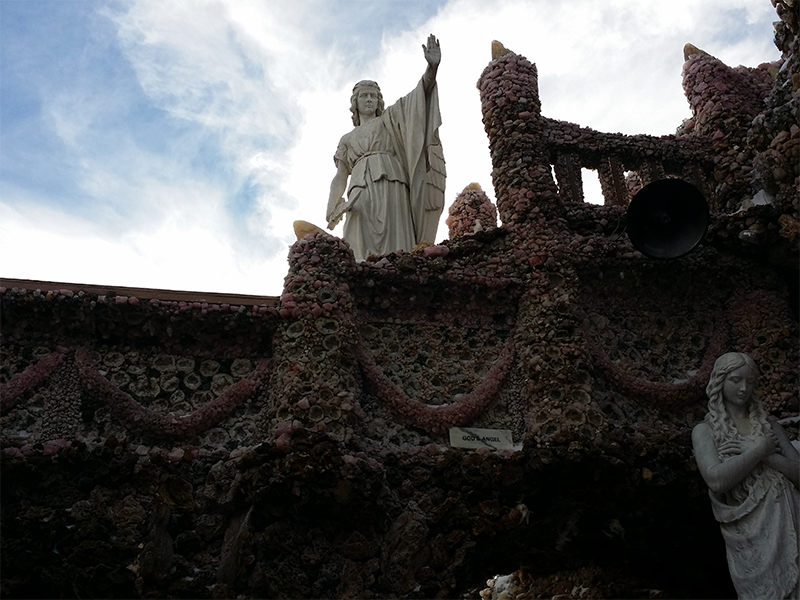 Garden of Eden, or “Paradise Lost”

Adam & Eve are being driven out of the Garden of Paradise by an angel above. The devil, depicted as a green serpent wound around the trunk of a tree, tricked Adam and Eve with a lie resulting in man’s fall from sanctifying grace. The plaque of the Immaculate Conception found in the left-hand corner is a symbol of God’s promise to send a Redeemer.

Here stands Moses giving to the world the Ten Commandments of God. A young man is asking Jesus, through the 8 ft. question mark on the ground, “Good Master, what good shall I do that I may have life everlasting?” Jesus answers him with the words on the wall, “If thou wilt enter into life-keep the commandments.” This grotto contains stalactites centered overhead and many rosettes, the rock clusters found on the walls.

The Stable in Bethlehem

This grotto made of 65 tons of petrified wood from Montana and the Dakotas shows the traditional manger scene of Mary, Joseph, and the baby Jesus. Fr. Greving erected this grotto in 1956, and the statuary arrived in the early 1970s.

“In those days a decree went out from Caesar Augustus that all the world should be enrolled. This was the first enrollment, when Quirinius was governor of Syria. And all went to be enrolled, each to his own city. And Joseph also went up from Galilee, from the city of Nazareth, to Judea, to the city of David, which is called Bethlehem, because he was of the house and lineage of David, to be enrolled with Mary his betrothed, who was with child. And while they were there, the time came for her to be delivered. And she gave birth to her first-born son and wrapped him in swaddling cloths, and laid him in a manger, because there was no place for them in the inn.” Luke 2:1-7 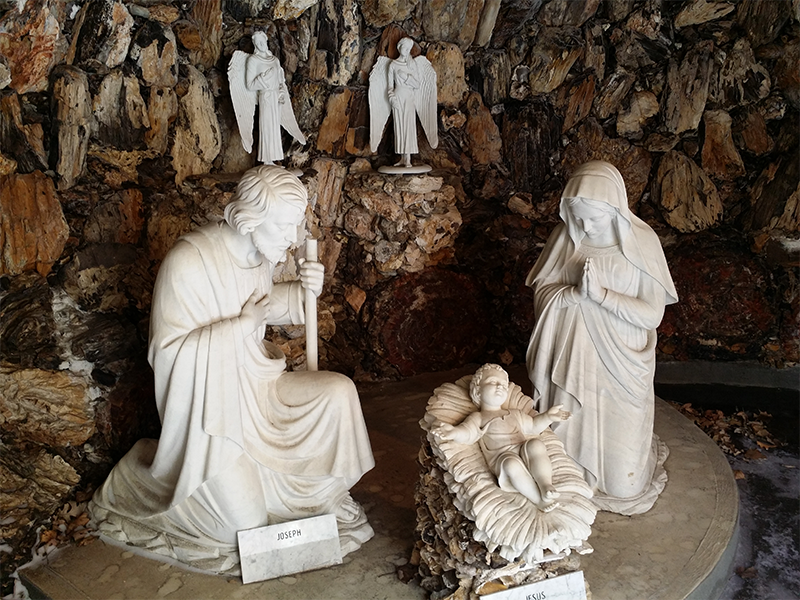 Built in 1927, and located inside Sts. Peter & Paul Catholic Church, this grotto represents the birthplace and the Nativity of Our Divine Savior. Specimens that Fr. Dobberstein considered too delicate to withstand the weather and changing seasons were incorporated into this grotto. Of particular note is the 300 lb. Brazilian Amethyst inset in the wall above the Christ child. 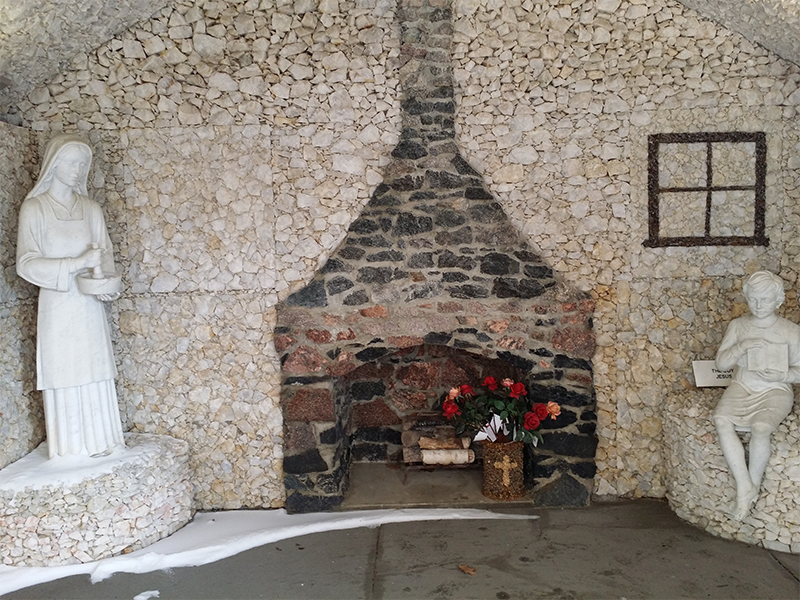 The Grotto of Nazareth

This grotto, completed in 1955 by Matt Szerensce and Fr. Greving, depicts the modest boyhood home of Jesus and His earthly parents. The white quartz was used to symbolize the virtues and pureness of the home.

“In the sixth month the angel Gabriel was sent from God to a city of Galilee named Nazareth, to a virgin betrothed to a man whose name was Joseph, of the house of David; and the virgin’s name was Mary. And he came to her and said, ‘Hail, full of grace, the Lord is with you!’ But she was greatly troubled at the saying, and considered in her mind what sort of greeting this might be. And the angel said to her, ‘Do not be afraid, Mary, for you have found favor with god. And behold, you will conceived in your womb and bear a son, and you shall call his name Jesus. He will be great, and will be called the Son of the Most High; and the Lord God will give to him the throne of his father David, and he will reign over the house of Jacob forever; and of his kingdom there will be no end.’” Luke 1:26-38

Christ’s Sermon on the Mount

Jesus explains to us in the Eight Beatitudes exactly what we must do to enter into heaven. These Eight Beatitudes are written in gold mosaic, inlaid in green copper. The grayish colored stone on top is a stalagmite weighing more than 2000 lbs. from Carlsbad Caverns, New Mexico, acquired prior to the caverns becoming a National Park.

“Seeing the crowds, he went up on the mountain, and when he sat down his disciples came to him. And he opened his mouth and taught them.” Matthew 5:1-2 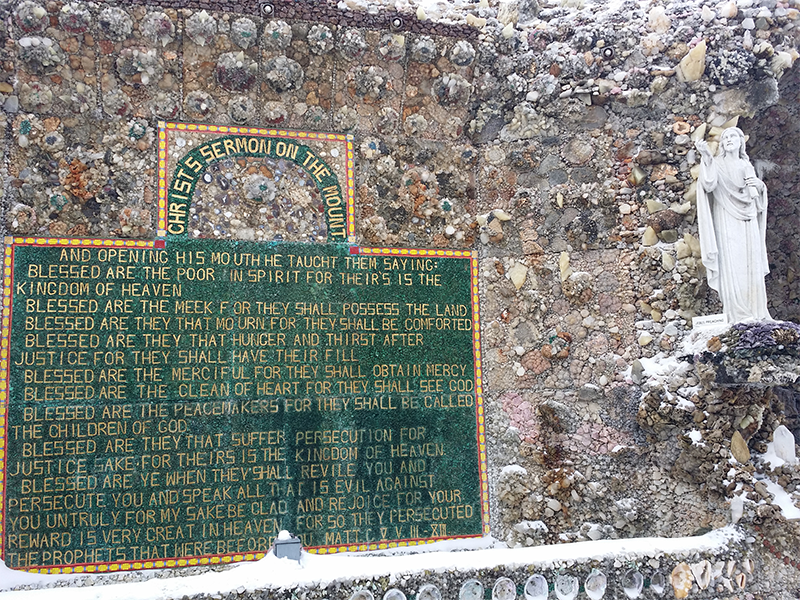 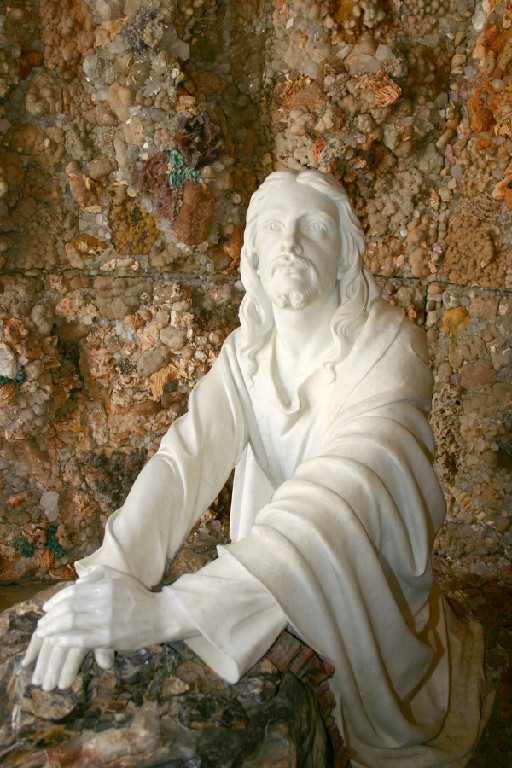 The Garden of Gethsemane

Gethsemane is the garden outside Jerusalem where Jesus went to pray the night before he died. Judas is sneaking around the corner carrying the bag of 30 pieces of silver he was paid to identify Jesus. The Angel of Comfort is portrayed in the opposite corner, as well as Peter and John sleeping outside.

“And he came out, and went, as was his custom, to the Mount of Olives; and the disciples followed him. And when he came to the place he said to them, ‘Pray that you may not enter into temptation.’ And he withdrew from them about a stone’s throw, and knelt down and prayed, ‘Father, if you are willing, remove this chalice from me; nevertheless not my will, but yours, be done.’ And there appeared to him an angel from heaven, strengthening him. And being in an agony he prayed more earnestly; and his sweat became like great drops of blood falling down upon the ground. And when he rose from prayer, he came to the disciples and found them sleeping for sorrow, and he said to them, ‘Why do you sleep? Rise and pray that you may not enter into temptation.’ While he was still speaking, there came a crowd, and the man called Judas, one of the Twelve, was leading them. He drew near to Jesus to kiss him; but Jesus said to him, ‘Judas, would you betray the Son of man with a kiss?’” Luke 22:39-44

The Stations of the Cross

The Stations of the Cross are 14 scenes in the life of Christ from the time He was condemned to death by Pilate, until His body was laid in the tomb. The Venetian mosaics, imported from Italy, were incorporated into the pillar work to visually tell the story of the Way of the Cross. Stations 1-11 are made of brown jasper to symbolize suffering and death, and the 12th station is made of white stone to symbolize the importance of Jesus’ death on the cross.

The statue on the 40′ high mountain-like structure is similar to Michelangelo’s Pieta which is in St. Peter’s Basilica in Rome. It shows Mary holding the body of Christ after it was taken down from the cross. Beneath the cross is a 36″ cross-section of petrified wood from Arizona.

“So they took Jesus, and he went out, bearing his own cross, to the place called the place of the skull, which is called in Hebrew Golgotha. There they crucified him, and with him two others, one on either side, and Jesus between them.” John 19:17 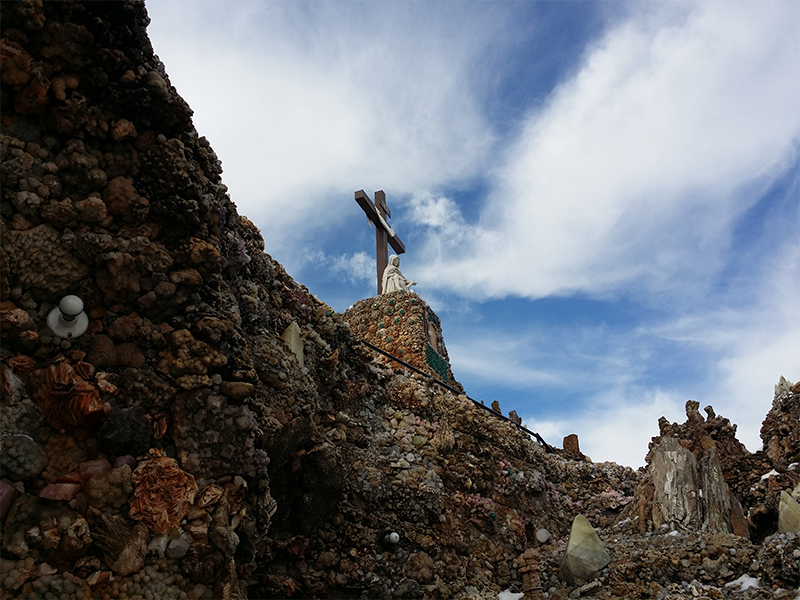 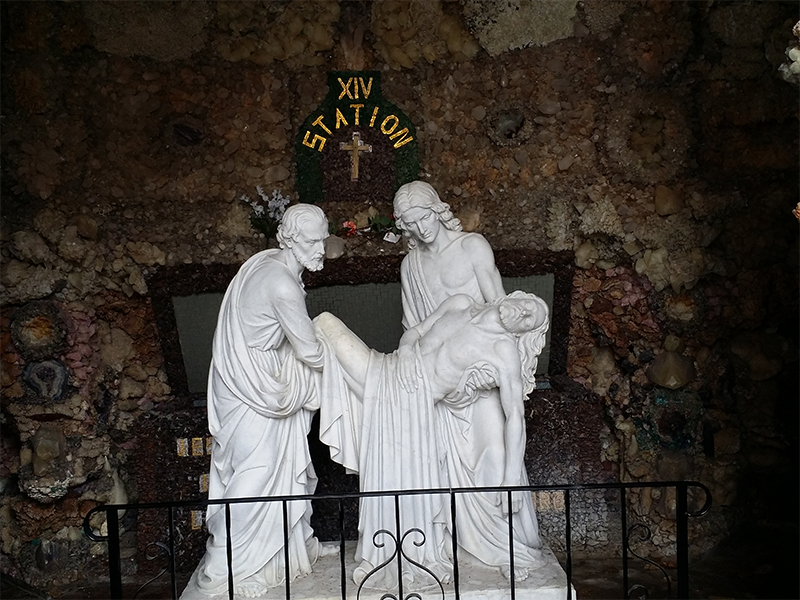 The Entombment of Jesus

Joseph of Arimathea and Nicodemus are seen reverently and sadly holding the body of Jesus. The three figures have been sculpted out of a single block of white Italian marble.

“They took the body of Jesus and bound it in linen cloths with the spices, as is the burial custom of the Jews. Now in the place where he was crucified there was a garden, and in the garden a new tomb where no one had ever been laid. So because of the Jewish day of Preparation, as the tome was close at hand, they laid Jesus there.” John 19:38-42

As you approach the archway, you’ll notice an alcove containing a statue of our Risen Savior with Mary Magdalene at His feet. In the Grotto of the Resurrection there is an empty tomb with an angel pointing to the lid of the tomb on which is written: “He is risen, He is not here.” The white calcite and purple fluorite near the tomb show the coldness of death and the reality of evil, while the bright colored ceiling symbolizes his victory over sin and death.

The statue was erected in 1992, to commemorate the 80th anniversary of Fr. Dobberstein beginning construction of the Grotto in 1912. 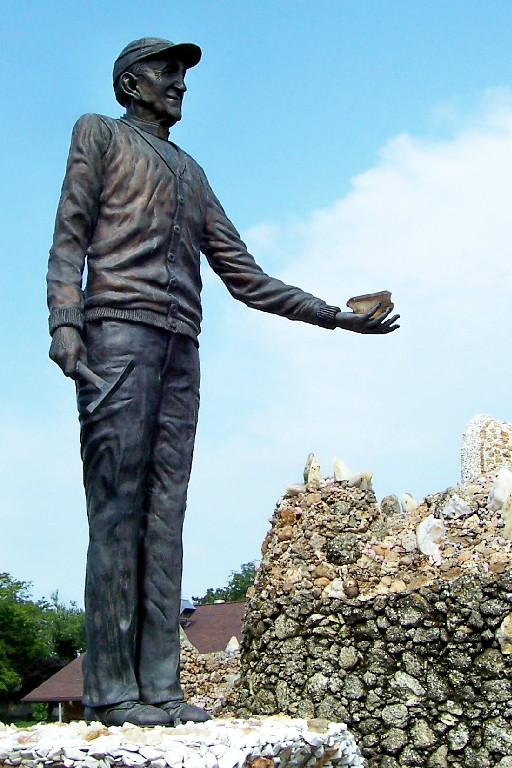 Shrine of the Grotto

© 2020 The Shrine of the Grotto of the Redemption | West Bend, Iowa.
Website Development by Neapolitan Labs